Twelve toys and games, all connected to the castles of Transylvania were designed, in the project entitled EduCastle, for younger and older children to try them, have fun with them, and in the meantime, to learn about these buildings, but also about the eras, architectural styles and social contexts that are part of their history.

The project contains four types of toys and games: constructive, sensory, logic and rule-based. All toys are made of natural materials like wood, stone or sand.

The EduCastle toys were made by Morgod and subventioned by the Administration of National Cultural Fund (AFCN). 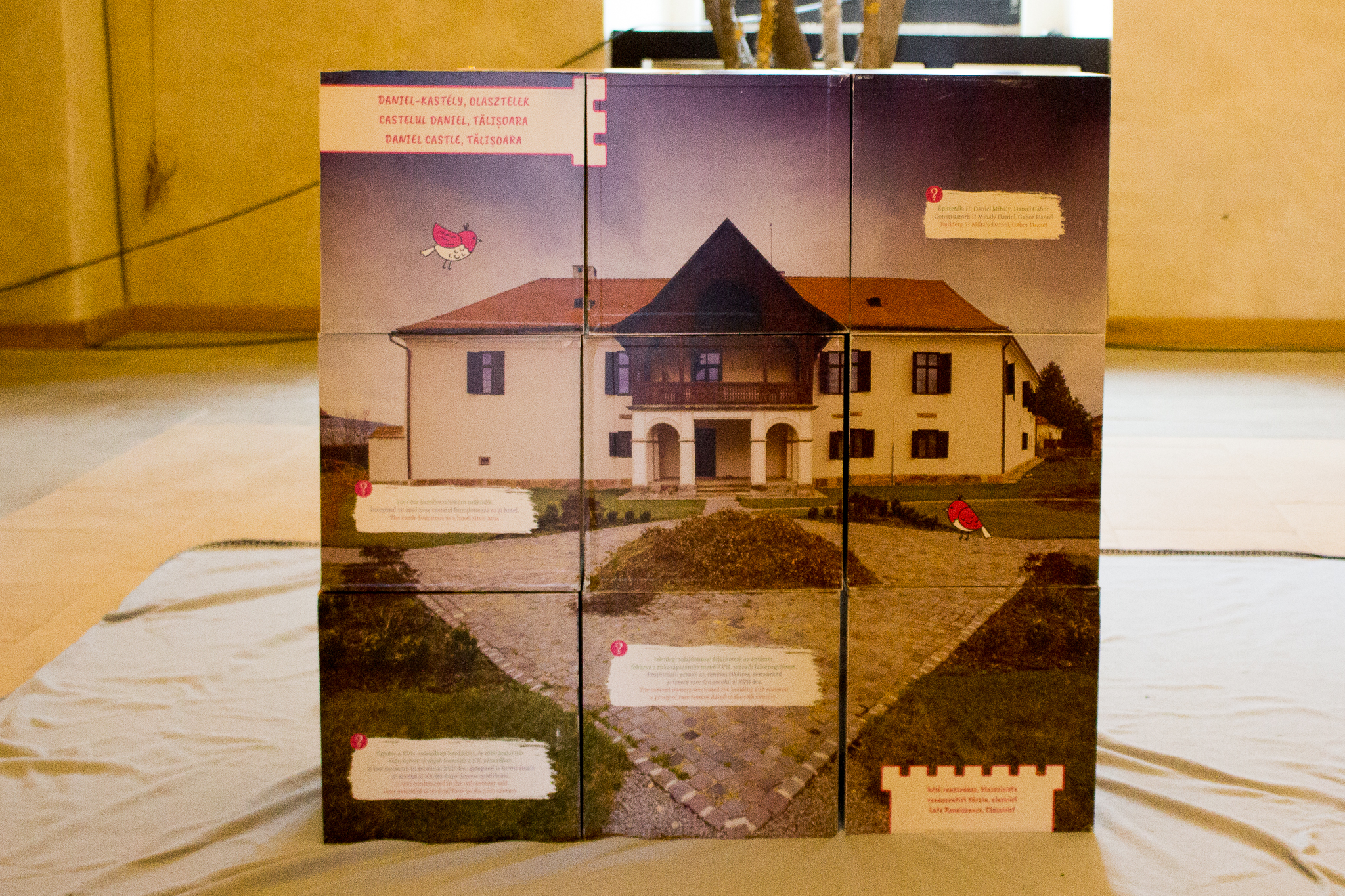 Six Transylvanian are hidden on the cubes: 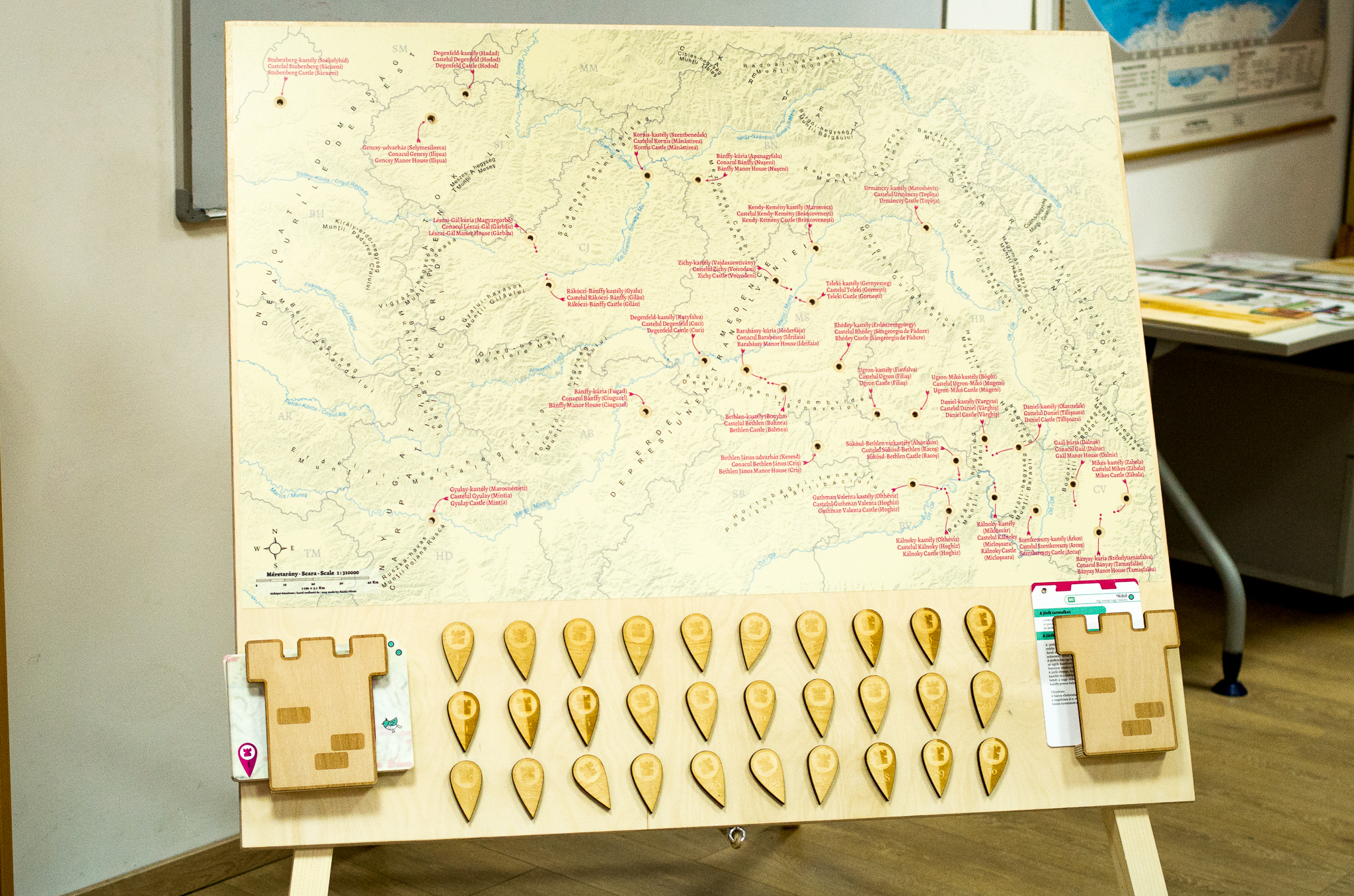 How to play:
The key element of this orientation game is a big relief map. Thirty castles with their exact locations and names are marked on this map. On the bottom of the map are placed 30 numbered pins and on the right side of the map there can be found 30 educational cards, also numbered from 1 to 30.
The player chooses one of the numbered cards and also takes the matching pin.
On one side of the card interesting details can be read about one certain castle, without mentioning its name. On the other side of the card there is a fragment of the map with the exact location of the castle. The goal of the game is to identify the exact location of the castle based on the above information. The player has to pin the right place of the castle, by placing the wooden piece in the hole that is considered to be the correct location.

Verification:
After placing the pin, the player has the possibility to check the number on the back of the map. If the two numbers match, the player succeeded in identifying the exact place of the castle on the map. 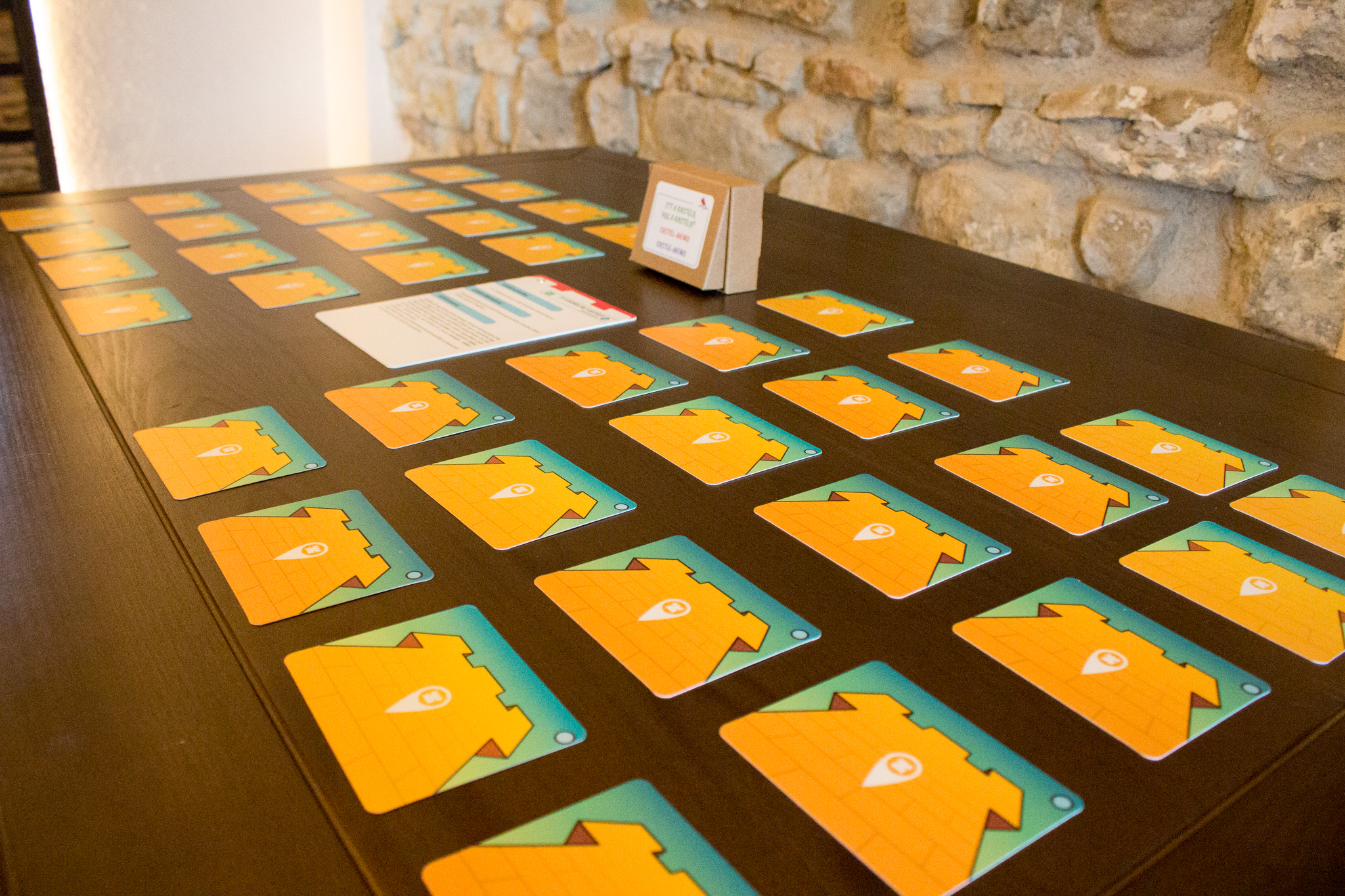 Setting up:
Shuffle the cards and lay them out face down in rows forming a large rectangle on the table.

How to play:
This game can be played by 2 or 3 players. They can decide on the order of their turns with the rock/paper/scissors game. The first player turns over any two cards. If the two cards match, he can keep the pair. The player is awarded with another turn for making a match and goes again. If the cards are not a match they are turned back over and it is now the next player’s turn.
The game is over when all the cards have been matched.
The player with the most matching pairs wins. 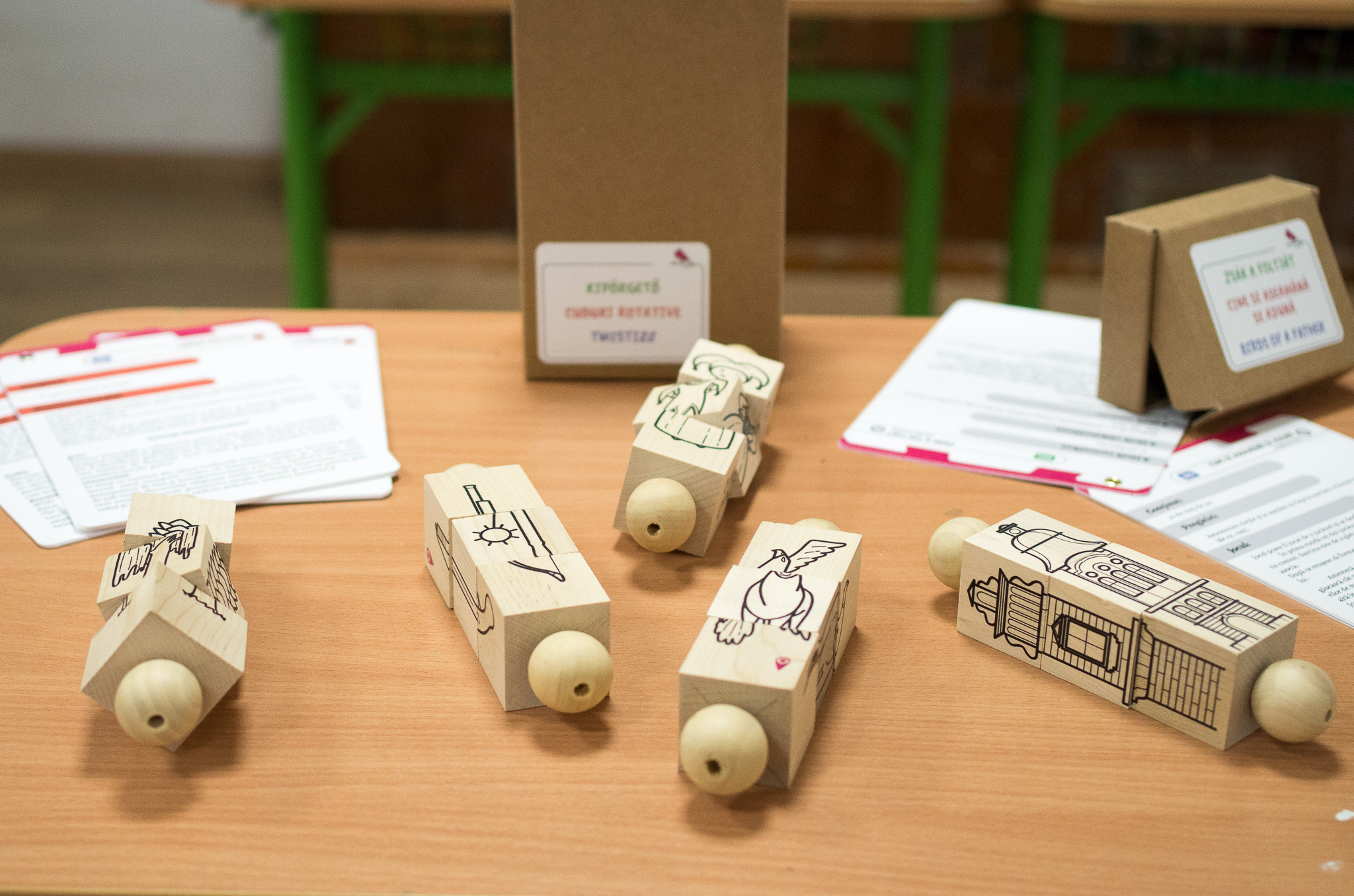 How to play:
One set of Twistizz contains 5 spinning blocks. On every block there are black and white drawings of five specific themes: architectural styles, clothing, flora, fauna and military tools.
The object of this game is to twist and turn the wooden blocks in order to make the different drawings.
For the youngest the formation of different figures is already a success, while older children can learn about the pictures by reading the short descriptions of the various illustrations. 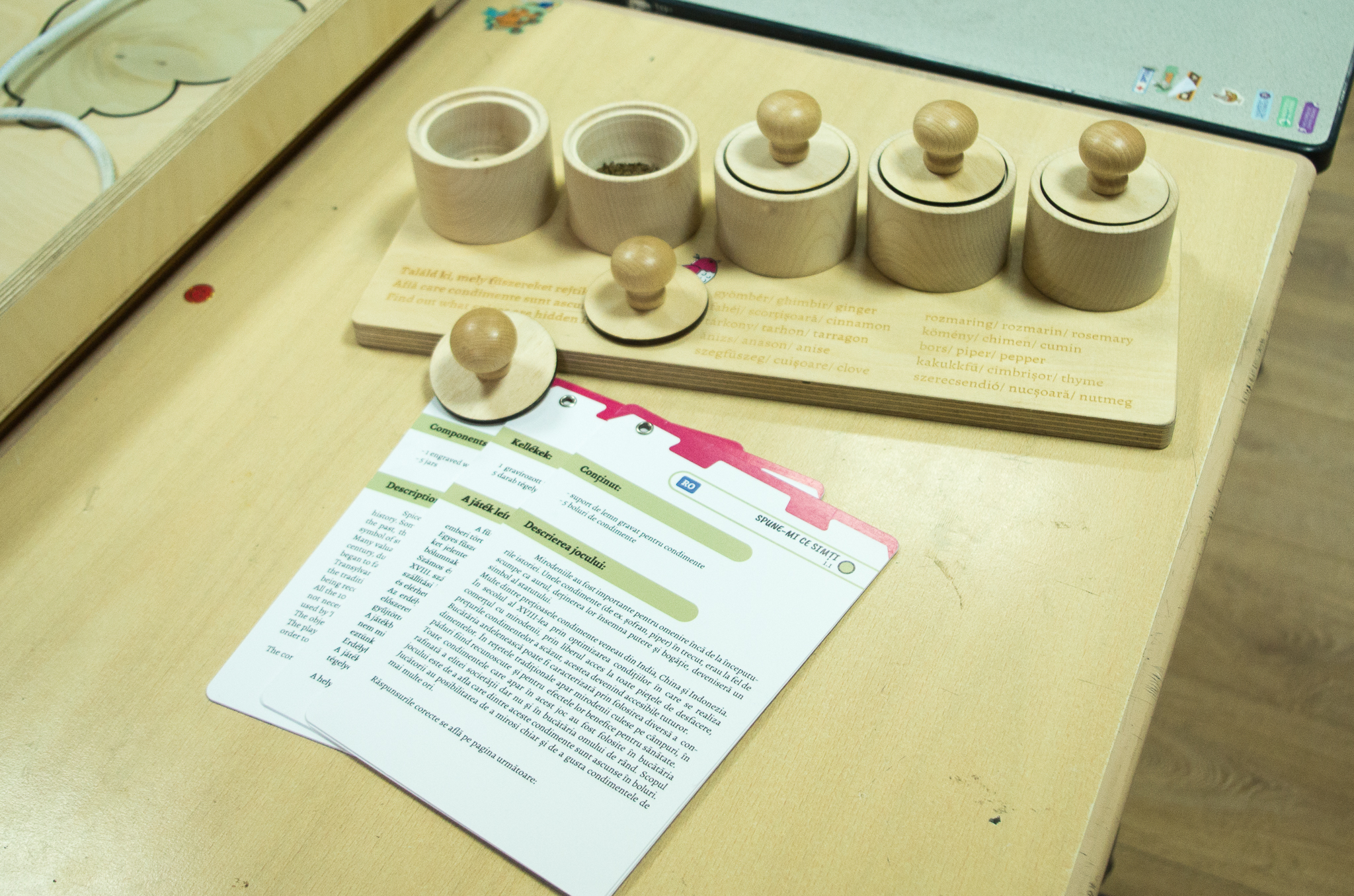 How to play:
Spices have been important to humanity since the beginning of history. Some spices (such as saffron, pepper) were as expensive as gold in the past, their possession meant power and wealth, they had become a symbol of status.
Many valuable spices came from India, China and Indonesia. In the 18th century, due to the constantly improving transport conditions, spice prices began to fall and became accessible to everyone.
Transylvanian cuisine can be characterized by the use of variable spices. In the traditional recipes there are used spices collected in forests and fields being recognized also for their beneficial effects on health.
All the 10 spices presented in this game were used in the noble cuisine, but not necessary by common people, too. The spices placed in the jars were used by Transylvanian people since the Middle Ages.
The object of the game is to figure out what spices are hidden in the jars. The players have the possibility to smell or taste the spices several times in order to find the right answers. 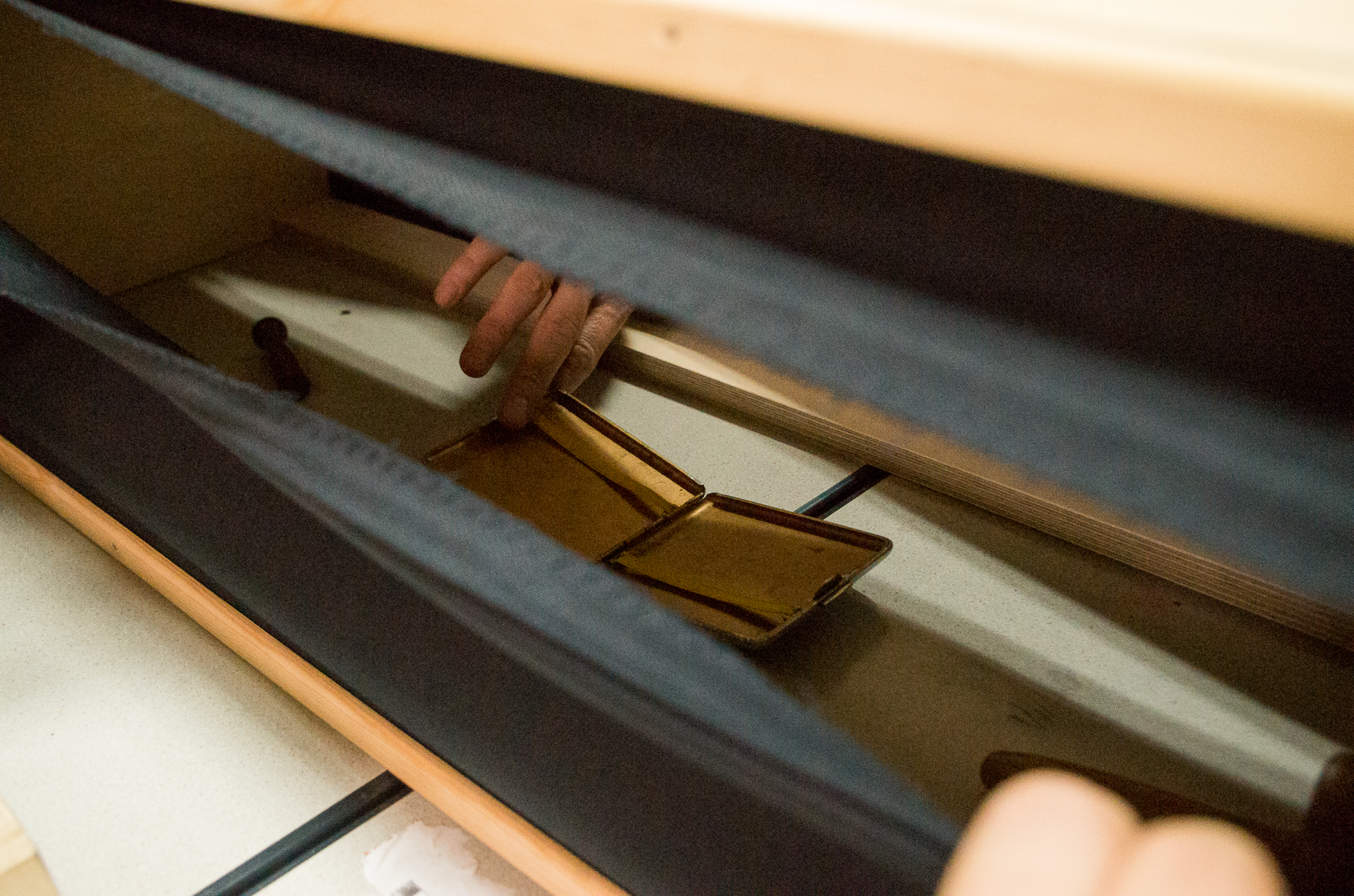 How to play:
We place as many old tools as possible under the black box. Players have the opportunity to touch these objects by inserting their hands through the openings of the box. The goal of the game is to recognize as many tools as possible only by touching them. Do not look into the box! The recognized tools and objects can be checked in the photo album. 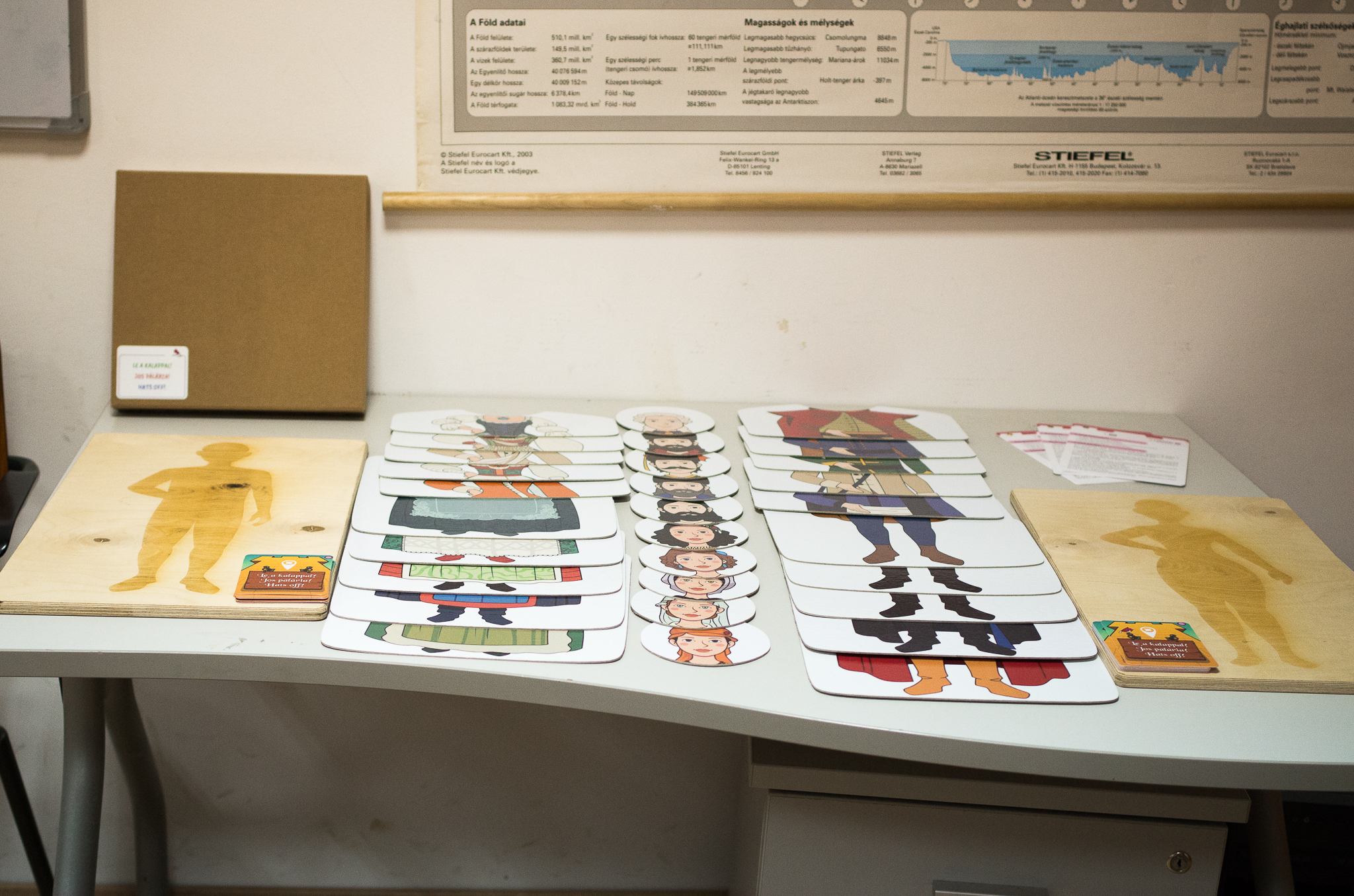 How to play:
“Hats off! “is a dress up game. It contains 10 sets of garments printed on cardboard, cut into pieces. The object of the game is to find all the right elements of a clothing. The drawings are inspired by the clothing and the specific accessories of the different social classes from the 17th and 18th centuries.
This game can be played by children of different ages:
Ages 4-7:
Younger players take from the picture cards and try to dress up the man or woman. On every picture 2 or 3 elements of clothing are specified.
Ages 7+:
Older children can play with the text cards. The game can be played with 2 or 3 players. The first player takes a card and tries to dress up one of the engraved shapes on the basis of the given information. If he succeeds, he wins 3 points.
If the player cannot decide on the right elements of clothing he can read the short description of the character. If this will help him in giving the right combination of the pieces, the player wins 2 points.
If the player wants to take a look at the picture card also, then he can dress up the man or woman for 1 point.
The game ends when all the cards have been used.
The player with the most point is the winner. 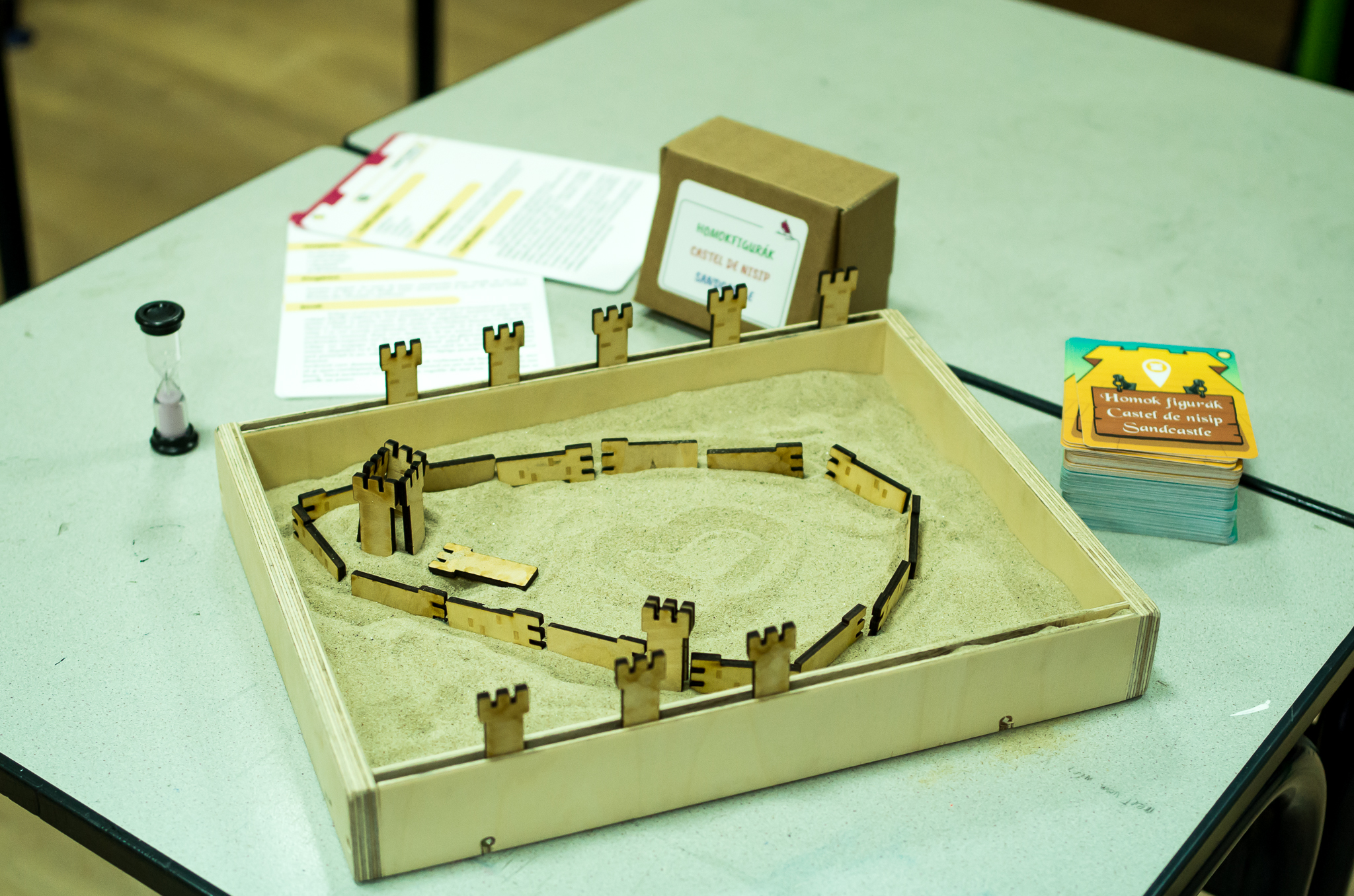 How to play:
The team with the youngest player is entitled to start the game. Each team decides on the order in which their members will play. The selected player takes the first card, making sure the others have not seen it.
Each card contains a word that the player has to draw with his finger in the sand. He will be given a few seconds to look at the word, eventually memorize it, after which the hourglass is inverted. The player’s team has a minute to guess the word. If the team fails to guess the word during the first minute, the hourglass will be turned for the second time, and now the other team is also participating in the game, thus they have the chance to win points by guessing the word. The drawer is not allowed to speak, to make noises or to help his teammates with any signs. The drawing must not contain figures or letters. If the player breaks one of the above rules then his team loses one point.

Components:
mill board
18 pieces in two colors (9 white and 9 black) 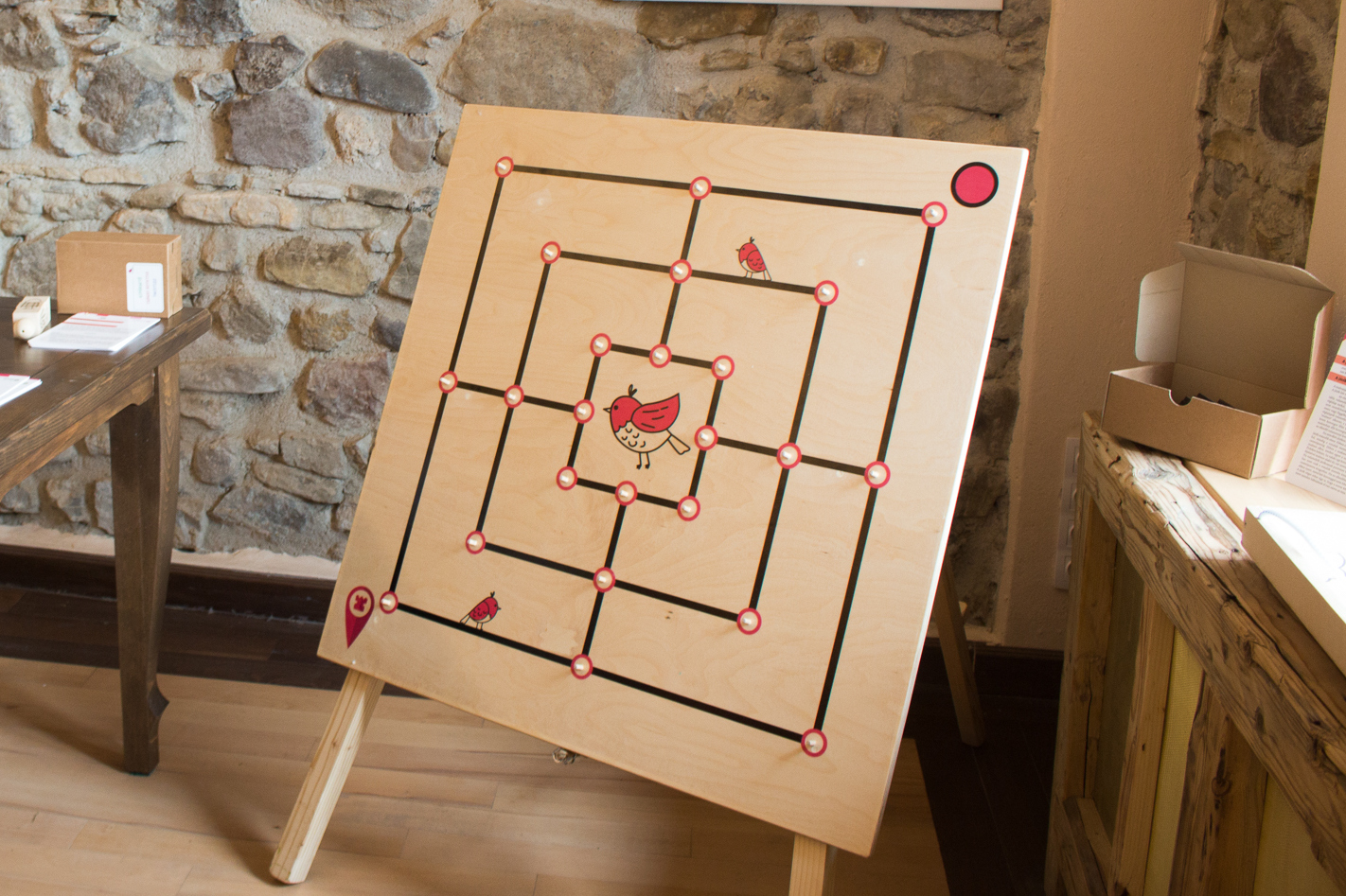 How to play:
This is a classic nine men’s morris game for two players. Place the empty mill board in the middle. One of the players will take the nine white pieces and the other the black pieces.

9. Birds of a Father 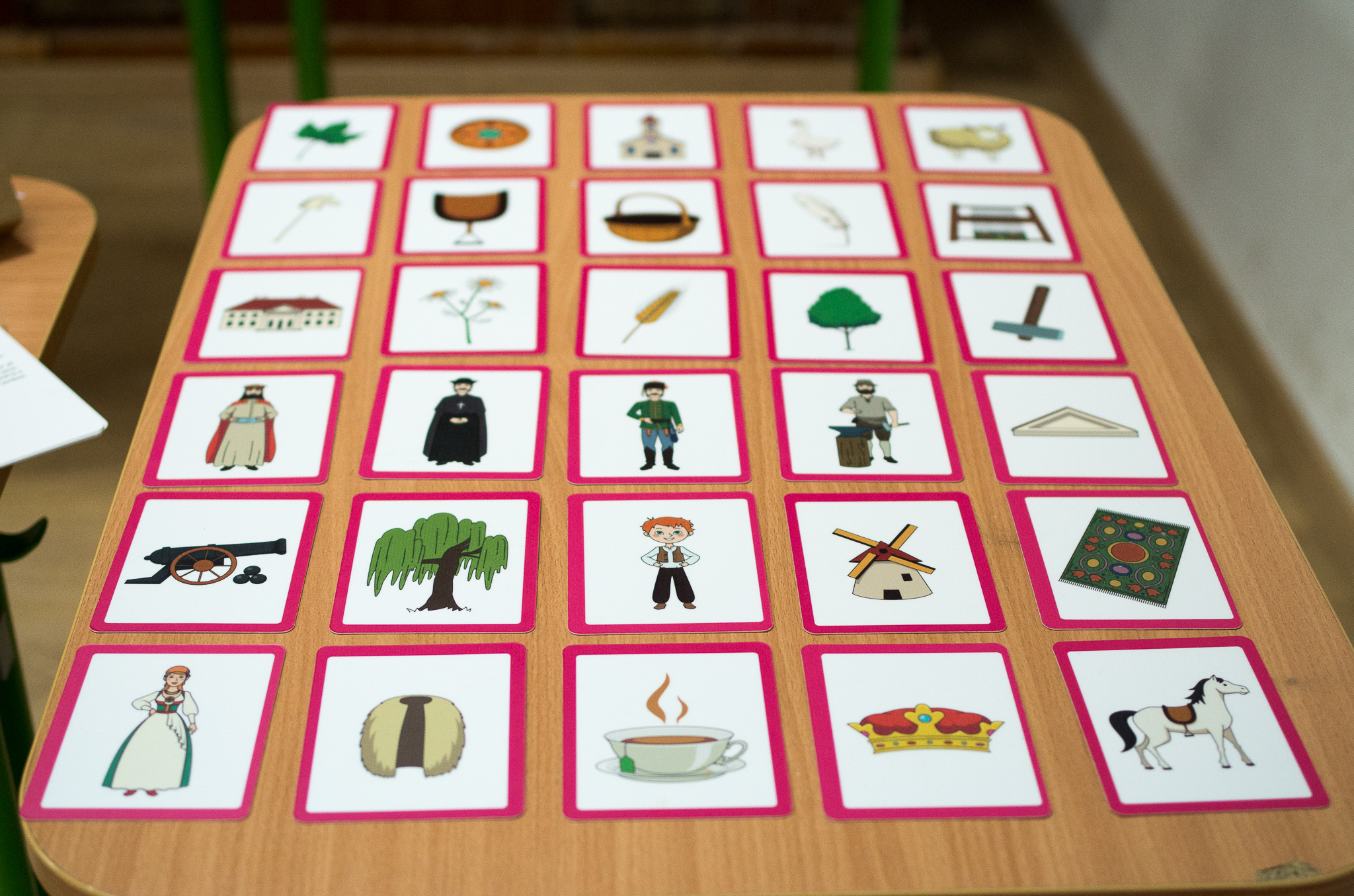 How to play:
In the first round, the two players form one team for a common goal. Their task is to match the cards by revealing the conceptual relationships between them.
Once they manage to form pairs, the second part of the game follows.
They shuffle the cards and lay them out face down in a rectangle shape. The goal of the game is to find as many pairs as possible. This part of the game is played according to the basic rules of memory games. If a player finds a pair, he is entitled to another try, if he does not find a pair, the next player’s turn comes.
The game is over when all the cards have been matched.
The player with the most matching pairs wins. 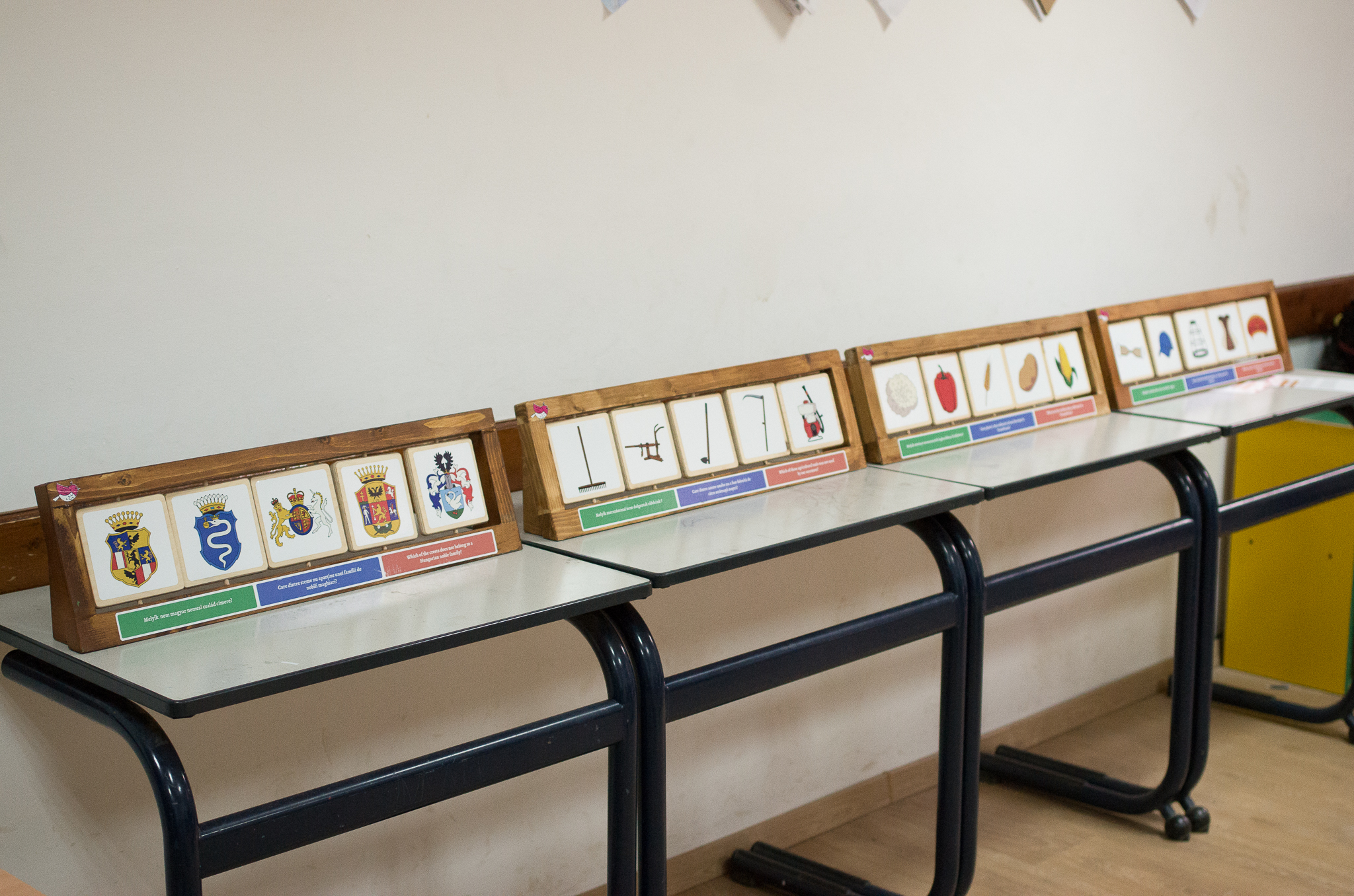 How to play:
Every board is made up of five rotating windows. There are drawings on the windows from different categories: plants, articles of clothing, agricultural tools and crests. On the back of the windows we can read short descriptions of every drawing.

The object of this game is to answer correctly to the questions written on the bottom of every board, to find the odd one out by analyzing the pictures, guessing which one of the five items does not belong to the logic of the row.

Place the board in front of you, in a way that every window is turned to the images, read the question, and analyze the drawings. If you have selected one of the drawings, turn that window to check the answer. If the frame of the window is black, the answer is correct. If your first attempt have failed, you may continue until you find the correct answer. You can read interesting information about the images by turning every window.

LAYOUTH comes from Local Action for Youth. But it is also the combination of...

The aim of the CIVIT Platform is to develop and implement structured dialogue mechanisms...

The project’s mission is to strengthen the role of young individuals and informals groups...